A year and a half ago, Andrea Buchanan’s and Miriam Peskowitz’s The Daring Book for Girls entered the book world with a raucous yee-haw! And in a shorter amount of time than it actually took you to say “the daring book for girls,” the book was a best-seller. I see it everywhere—in malls, in the airport, in boutiques and specialty stores—and each time I do, I utter my own yee-haw for Miriam and Andrea! You go, girls!

When I posted about The Daring Book then, this is what I wrote:

One of the things I love about The Daring Book is that it acknowledges the abilities and interests and achievements of girls and women today and of women throughout history. It’s not overtly feminist (the way I can, on occasion, be), but inherent in each of these pages is what feminism, to me, is all about.

I could basically write the same thing today about their sequel, The Double-Daring Book for Girls, which combines more wonderful activities, fascinating information–who doesn’t like to read about volcanoes?–and glimpses into the lives of daring women throughout history (my favorite part of the book.) I love this book as much as I loved the first one, and now that Stella is a little older, we were able to really look at it and read it together. It’s going to be the perfect book to turn to this summer when the long days stretch before us.

In our house, it’s against the rules to use the word “bored.” And here I should clarify: Stella is not allowed to say it, but that doesn’t keep me from sometimes feeling it and/or spelling it out over the phone to a friend. My boredom—and I’m sure Stella’s, as well—arises from the age difference between my daughters. Zoë, at fifteen months, gets into everything, which limits the possibilities for crafty play when we’re all together.

And because “bored” has no place in our house, I was of course drawn to The Double-Daring Book’s “What to Do When You’re Bored” page, which lists making blocks and having water balloon fights as possibilities. But what jumped off the page was #3: Make Beaded Safety Pins. Do any of you remember making these as grade-schoolers? We called them “friendship pins,” and I remember trading them with my friends and clipping them onto my tennis shoes. But what I now realize–and maybe I knew this even then–is that I never made them correctly. On page 219, Miriam and Andrea write that there is a trick to making these: “you need to pry open the coil on the safety pin so you can push the beads onto the top part of the safety pin that doesn’t usually open up. Use a small screwdriver of a pair of long-nosed pliers to do this. When you’re done, close the coil back to its usual position so the beads will stay put.” How did I not know this?

I should have mentioned earlier that this post is more than just a post about the book: it’s a double-daring book shower. Instead of a blog book tour, The Double-Daring Book is having a book shower in which bloggers write about activities they tried from the book and challenge readers to best their score. Again, yee-haw!

Since Stella loves beads and could spend hours and hours making jewelry, I knew this was the perfect activity for us to try. (I also thought I could finally—now that I am almost 37 years old—learn to make a friendship pin properly.)

So Stella and I went to the craft store to stock up on supplies. A half hour and $23 later, we emerged with boxes of multi-colored beads, safety pins, and twine and more beads (for another project). When Zoë went down for her nap, we spread out our supplies on the floor, I found the pliers, and we got to work. What I didn’t anticipate, however, was that pulling apart the coil of a safety pin takes practice or that the beads we bought were maybe too tiny or that the pins we bought were maybe too thick or that once the beads were finally on the pins, it wouldn’t be the easiest thing to close the coil again. Okay, so I might be making excuses. This is what we created in one hour: 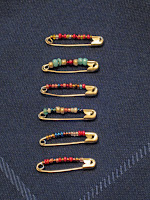 (The ones with the big clunky beads are mine. I understand why they didn’t make the cut when Stella chose her three favorite pins. I actually told her I was making them for her, and she told me I could keep them for myself.)

What I want to know is whether you can do better than six friendship pins in an hour on your first try? I double-dare you!

There was one thing in the book scared me: the ability to dye one’s hair with Kool-Aid. I’m not nervous about the possibility of Stella doing this; I’m concerned about—and disgusted by—what all that Kool-Aid I consumed as a child has probably done to my organs. Anything that stains the way Miriam and Andrea describe on page 48 cannot be good for the operating system, and my sisters and I drank a gallon of this stuff—with extra sugar—every day for years and years!

I also have one question: can you really use abbreviations in Scrabble? Has the National Scrabble Association gone soft, allowing AD and AB?

Leave your friendship pin scores in the comments. I dare you. Come on, don’t be scared. Are you chicken?

I’m a mother, writer and teacher. I’ve been helping moms tell the stories they need to tell since 2006. I’m the author of Use Your Words: A Writing Guide for Mothers (Viva Editions, 2012) and Ready for Air, a memoir about the premature birth of my daughter (University of Minnesota Press, 2013), and co-author of Silent Running (Triumph Books, April 2015). I teach in Ashland University’s Low-residency MFA program, and I teach online and at the Loft Literary Center and ModernWell in Minneapolis. I am also an editor and writing coach. Visit my website, www.katehopper.com for more information.

On Television
Kate on AM Northwest - August 14

Kate discussing Use Your Words with Marti and Erin on Mom Enough - April 30, 2012

Listen to Kate talk about writing and teaching on Mom Enough.

Interview with Kate in the Minneapolis Star Tribune

I do not receive pay for promoting or reviewing books or interviewing authors on Motherhood & Words, though I do sometimes receive free review copies from authors and publishers. My first responsibility is to my readers and I am committed to honest reviews. Please note that I do not trash books or authors, so if your book doesn’t work for me or isn’t a fit for Motherhood & Words, I will not post about it.